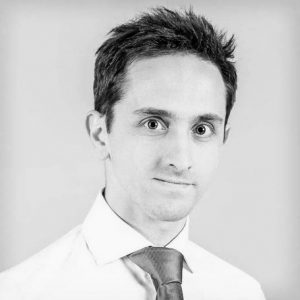 This year the Nobel Prize in Chemistry was awarded to Benjamin List and David W.C. MacMillan for the development of asymmetric organocatalysis.

What is asymmetric organocatalysis?

However, their chemical properties are different when they react with other molecules that are also chiral. In fact, in our own body we find chiral compounds appearing only as one of the two enantiomers, thus resulting in odd effects such as the flavor of aspartame, which depends on whether it is one enantiomer (sweet taste) or another (tasteless). Dextromethorphan is a cough medicine, while its mirror image, levomethorphan, can be used to relieve pain. Dramatic effects are also known, such as that of the drug thalidomide, which was marketed until 1963 for the treatment of nausea during pregnancy, but whose presence (until then unknown) of the other enantiomer was responsible for causing thousands of cases of congenital malformations.

This is where the importance of asymmetric organocatalysis comes in, especially in the pharmaceutical industry.

This type of chemical reaction, developed between the late 1990s and early 2000s, uses an organic asymmetric catalyst (a molecule that has carbon atoms, for example) that favors a single enantiomer over the alternative of a chiral compound, thus allowing the synthesis of pure enantiomeric compounds, which are of very high interest in the chemical industry, especially the pharmaceutical industry.

Asymmetric organocatalysis has been identified as one of the 10 most important emerging technologies in the field of chemistry today. Their main advantage lies in their potential to make our planet more sustainable, since they are intended to replace metal catalysts. They therefore contribute to the global trend of trying to make chemistry a cheaper and more efficient industry, both economically and environmentally.

Around the year 2000, the German Benjamin List and the American David Macmillan independently published two pioneering studies in the field of chemistry that opened a new line of research.

List, professor at the Max Planck Institute, discovered in the late 1990s that the amino acid proline (with a chiral center) catalyzed a particular type of organic reactions (aldol reactions).

MacMillan, professor at Princeton, on the other hand, discovered the utility of organic catalysts in an attempt to avoid the use of metallic catalysts.

Each has a different trajectory, but very prolific both from the point of view of advancement in scientific knowledge and in the field of industrial property. In fact, Benjamin List is a co-inventor on 12 patent families, published between June 1999 and October 2017. Macmillan, for his part, is a co-inventor on 14 other families of patents related to catalysis, published between July 2001 and September 2021.

Our body’s biochemistry is essentially chiral. It is thus no wonder that the vast majority of pharmaceutical products are also chiral. However, not all drug compounds are prepared using this technology, since more than 90,000 patent families have been published related to enantiomers, of which only a little over 3,000 are directly related to asymmetric organocatalysis. Of the latter, 10% have been published in the last year. We therefore believe that there is still an interesting way ahead in the development of new organic catalysts and new asymmetric synthesis routes.

In fact, at ABG we have extensive experience in protecting these types of inventions, in both asymmetric synthesis procedures and catalysts, but also in the protection of pure enantiomers.

Based on our experience, we could say that although the patent offices usually grant patents for a pure enantiomer, objections could arise due to the alleged lack of inventive step when dealing with compounds that, just like our hands, are practically identical to its mirror image. However, examiners are experts in their field and understand the difficulty associated with isolating, or synthesizing a pure enantiomer, so this is not the most common reaction from patent offices.

In the particular case of inventions focused on methods for the asymmetric synthesis, protected by method claims, at ABG-IP we recommend patent protection with the broadest territorial coverage possible, so that patent enforcement is available directly at the country in which the method is being reproduced.

André Santos
Patent Adviser - Chemistry, Materials & Pharma
André is a qualified European Patent Attorney and is part of our Chemistry & Materials and Pharma Departments. His main tasks include patent drafting, prosecution, FTOs and opinion work in the pharmaceutical, organic, inorganic and nanotechnology fields. Before joining ABG, he was a postdoc at UTT, France and an assistant professor to undergraduate students in polymers.

The process of creating value from knowledge is known as valorisation, and it can be achieved with industrial property rights which prove to be a

The beginning of summer is synonymous with switching off completely. Breaking away with daily routine is vital to enjoy a well-deserved holiday where both mind